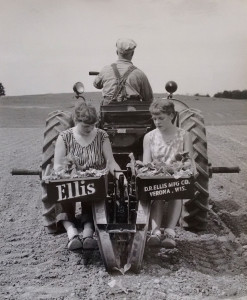 Ellis Mfg. Co., Inc. is a family owned small Verona business located in south central Wisconsin just seven miles from the state capital. The company was founded in 1950 by D.R. Ellis and his sons, Wayne and Homer. D.R. Ellis Mfg. Co. made transplanters, a farm implement used to transplant plants such as tobacco, cabbage, peppers, strawberries and nursery stock. Though still in use, the manufacturing of this product was discontinued in the 1980’s. Parts for this machine are still available. 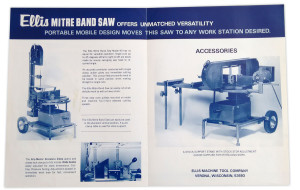 In the early seventies, Wayne Ellis began the fabrication of the mitering band saw, which is sold today. In 1978, Wayne and his wife Margaret became the sole owners of the business and expanded the company to its present site on nearly three acres along the Military Ridge State Trail. Over the years, the saw has expanded to include eight models. Wayne also engineered a belt grinder and began welding band saw blades. Later drill presses were added to the product line. Revisions and improvements to the products are made regularly.

Today, the company is owned and operated by Wayne’s daughter, Barbara and her children, Jonas and Jo Ellen. The success of Ellis Mfg. products owes much to the dedicated employees who strive to make superior machines and use their expertise to make constant improvements to the equipment and the working environment. Most of all, the owners are proud that these employees are courteous, professional and always available to assist customers.

We are going to purchase a new bandsaw for our shop & want the best, so we want an Ellis.

I bought this 1800 when I lived in Wisconsin almost 20 years ago.  Still going strong.  Great saw.

I have had this saw in the shop for at least 25 years and it has never let me down.